For a small contribution a month you can adopt a HeroRAT or HeroDOG and help us save lives. Our mission is to allow people all over the world to live, work, and play without fear of landmines or disease

Baraka is a sweet and playful young rat that is being trained as a Mine Detection Rat or ‘HeroRAT’ for short. He is training under expert handlers in Tanzania at APOPO's Training and Innovation Center.
Adopt Baraka

Ronin is a gentle landmine detection rat and loves shoulder rides. On the minefield he is focused and hardworking. Based in Cambodia, Ronin sniffs out deadly explosives faster than conventional solutions.
Adopt Ronin

Carolina is a female tuberculosis detection rat based in Dar es Salaam, a mega-city in Tanzania. Carolina can search 100 sputum samples in 20 minutes, much faster than a lab technician. Adopt Carolina and help us fight TB.
Adopt Carolina 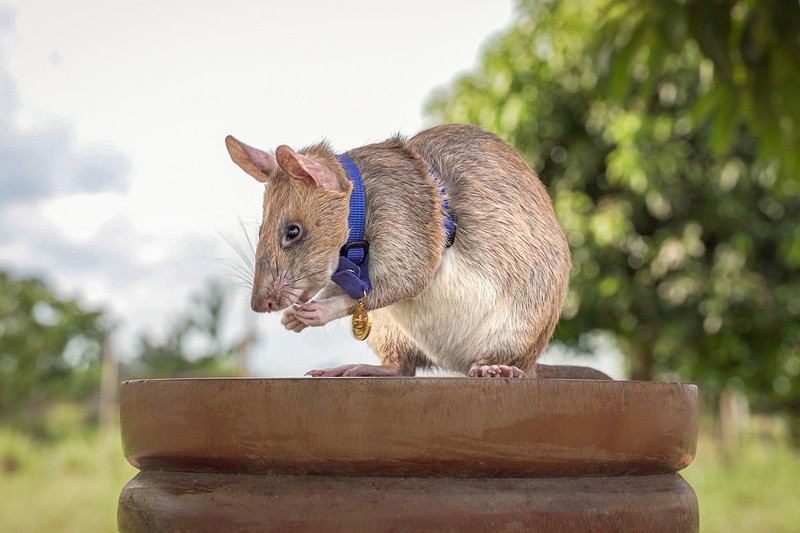 Magawa is APOPO's most successful HeroRAT. During his illustrious 5 year career, Magawa’s work directly saved the lives of men, women and children who were impacted by hidden landmines and other deadly remnants of war in Cambodia. In September 2020, veteran Magawa was formally presented with a suitably rat-sized PDSA Gold Medal – the animal equivalent of the George Cross – by the UK's leading vet charity. He is the first rat in the charity’s 77-year history of honoring animals to receive a PDSA Medal – joining a line-up of brave dogs, horses, pigeons and a cat. With mixed feelings, APOPO announced Magawa's retirement in June 2021. Sadly Magawa passed on peacefully in his sleep in early January 2022.

Mannes is strong-minded and a hard worker. Based in Siem Reap, Cambodia, he's known for his tenacity, high-levels of concentration, and loyalty when he's out in the field.
Adopt Mannes

Cyklon is a Belgian Shepherd with a nose for landmines and unexploded remnants of war. He's energetic, fast, and thoroughly enjoys lazing in the sun after a hard day's work.
Adopt Cyklon

Gizmo is a Belgian Shepherd with incredible energy at work. She's always wagging her tail but don't be fooled by her playfulness - she's serious when it comes to detecting landmines.
Adopt Gizmo

APOPO saves lives – I'm getting my life back on track!

WHERE YOUR SUPPORT REALLY MAKES A DIFFERENCE

Landmines and tuberculosis kill. Your support enables people to live, work, and play without fear.

There are over 300 animals under our care. Your support ensures they're treated like the heroes they are.

A digital Welcome Pack stacked full of pictures, facts, figures, and quotes that will tell you everything you need to know.

A digital certificate of adoption with your name on it.

Monthly updates direct to your email inbox to keep you up to date with the latest news and information from the field.

WANT TO FIND OUT MORE ABOUT ADOPTIONS?

The quickest way to find the answer to your question is to take take a look at our FAQ pages under the HeroRATs or HeroDOGs tab.
If you still need help, send us an email!

Join us on a life-saving mission

View Herogifts
We use cookies on our website to give you the most relevant experience by remembering your preferences and repeat visits. By clicking “Accept All”, you consent to the use of ALL the cookies. However, you may visit "Cookie Settings" to provide a controlled consent.
Cookie SettingsAccept All
Manage consent