Home » What we do » Detecting Landmines » Where we work » Zimbabwe 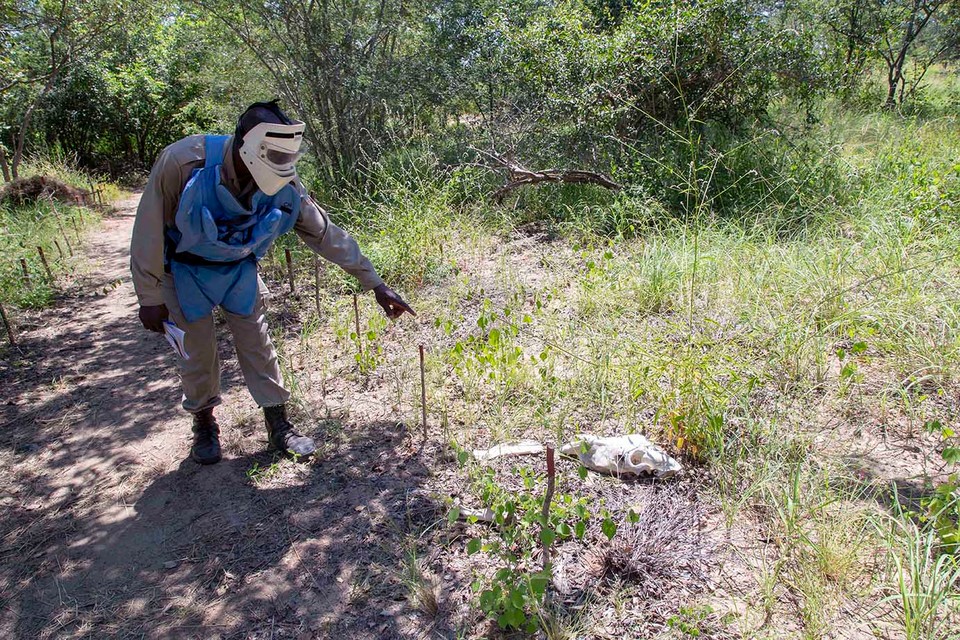 In Zimbabwe, landmines affect not only local populations but also their precious wildlife. Thanks to an initial start-up grant from the US State Department’s Office of Weapons Removal and Abatement (WRA), APOPO is clearing landmines along the minefield that affects the Sengwe Wildlife Corridor. APOPO’s goal is to clear the assigned area by Zimbabwe’s 2025 landmine-free deadline, releasing local populations and endangered wildlife from the threat of landmines and opening up eco-tourism opportunities.

Zimbabwe inherited over a million landmines, laid by Rhodesian security forces during the Liberation War. These minefields originally covered over 700 kilometers along the Zambian and Mozambican borders to prevent enemy movement in and out of the country. Efforts to clear these mines began in 1980, yet today vast tracts of land remain contaminated along Zimbabwe’s borders. The minefields are mainly made up of dense belts alongside communal lands, where fencing and warning signs are insufficient or nonexistent with devastating consequences for people, livestock, and wildlife.

Zimbabwe’s Cordon Sanitaire or CORSAN minefield, where APOPO is tasked, is one of the densest and most active minefields in the world with up to 5,500 landmines laid per kilometer. The tragic accidents that inevitably occur devastate already fragile communities. In addition, communities on both sides of the border minefield are unable to access basic necessities such as sufficient farming and cattle grazing land as well as paths and routes to reasonably maintain family ties and conduct livelihood activities, all of which contribute to a perpetual cycle of poverty.

APOPO’s area of responsibility falls within a narrow strip of land known as the Sengwe Wildlife Corridor. The Sengwe Wildlife Corridor is a specifically designated area aimed at allowing free movement of wildlife between South Africa’s Kruger National Park and Zimbabwe’s Gonarezhou National Park. The deadly landmines affect the wildlife who call the Great Limpopo Transfrontier Park (GLTP) home, which stands as one of the world’s largest conservation areas, spanning South Africa, Mozambique, and Zimbabwe. The landmines have remained in place for four decades and cause a serious threat to threatened wildlife such as elephants, lions, and wild dog as well as local communities who desperately need the land for grazing and agriculture.

Landmines and wildlife do not mix. Animals cannot read ‘danger’ signposts and unknowingly surrounded by landmines; accidents inevitably occur. For elephants, buffaloes and lions, this means the loss of a limb followed by a slow, painful death. Smaller animals die instantly. The minefield APOPO is tasked runs for 37 kilometers with an expected width of about 75 meters and thousands of deadly R2M2 anti-personnel landmines per kilometer.

Thanks to the generosity of the U.S. Government, through the Office of Weapons Removal and Abatement, U.S. Department of State, APOPO began clearing the minefield that affects the Sengwe Wildlife Corridor in the fall of 2020. We estimate we will find and destroy about 15,300 anti-personnel mines over the performance period. The total task is around 7.23 million m2 and we believe that it should be able to complete the task by 2025 with consistent donor support.

Throughout the project period, APOPO will liase closely with local village and government leaderships, as well as the Gonarezhou Conservation Trust, which is responsible for development of conservation efforts and ecotourism in the park. The coordination will ensure APOPO’s demining efforts are aligned with both conservation and development priorities of the region.

APOPO is extremely pleased by the generosity of the United States and Swiss Governments which allows us to demine this crucial elephant habitat that is so important to both local communities and wildlife and offers an important eco-tourism opportunity for Zimbabwe.

Detecting landmines in the following countries