Min stepped on a landmine as he was walking to his field, it changed his life.

“My name is Min and I am 60 years old, I live and farm in Sre Nui commune. I am married and we have two adult daughters. They both work in construction in Siem Reap and I am very happy because they both have a good job.

I didn’t always live here, I used to live in Bakong district in Siem Reap province in a very remote area. I’ve always worked as a farmer; I mainly grow rice and cassava to feed my family and if there is surplus to sell. My harvests this year have not been good – it depends on the year. Sometimes we can harvest and sell a lot, some years are harder.

When I first arrived here there was nothing, it was all bush, but my family was very poor and we needed to find a place to live, so I started clearing the bush and building our house. Some people told me that this area still had landmines, and I must admit, I was quite afraid. But I had no where else to go! How could I raise my family on nothing?

Sometimes, when I burnt the dead brush that I had cleared away, it would set off a landmine nearby and there would be a big explosion. I was very afraid when I heard explosion and we would run away. I knew friends and neighbors who lost their limbs or got killed because of them and I didn’t want the same to happen to me.

These terrible weapons were spread in this area during the war, here especially because it was a strategic point. Landmines were hidden to protect us from the Khmer Rouge, like a barrier. But the Khmer Rouge also planted them to defend the border of the land they had invaded.

When the war started I was already married, life at that time was extremely difficult, we were hiding and fleeing every day, nights were especially scary. Once the government found us and they too wanted to use us so they forced us to work transporting ammunition, luckily I was able to escape.

We would build shelter with wood and branches we had collected and a flimsy piece of fabric on top. It was very hard to find food each day, we lived off of what we could gather and hunt, like small wild rodents, to survive. Here in Cambodia when I was young we used to draw tattoos on our skin to protect us from bullets, from landmines, from illness. Normally elders draw them, it’s quite painful but many young people use them. I have tattoos on my neck, on my legs and arms. They didn’t help.

During the war there were no opened roads leading here, and it was not possible to reach the village market. The only way was by creating your own paths and walking, but we were afraid of landmines and of getting ambushed. We hid together with others in small groups staying out of sight in the forests, we’d take turns once in a while to brave it to the market to buy salt and the traditional ‘cheese’ we make with fish.

After the war ended we came out of hiding. But the hidden terrors were still there. One day I was walking to my rice paddy on a walking path just a few kilometers from home and I stepped on a landmine. I don’t remember too much about the explosion, it was so quick and sudden! I remember I was walking and suddenly I flew through the air and was thrown to the ground. I was still conscious and awake and I knew instantly by the pain that it was a landmine. And the smoke, I remember a lot of smoke.

Luckily when this happened, I was not alone but with three friends, one of them ran to the village asking for help, another one helped me trying to stop the bleeding. I was in so much pain, not only because of the huge injury to my foot but also because of powerful blast that made me fall and my ears ring.

The main problem after the explosion was that with no road it was very slow and difficult to transport me to the provincial hospital of Siem Reap. I was very afraid of dying because I knew how far the hospital was and that I was losing a lot of blood.

From the forest they took me with a hammock to the village, then from Sre Nui we used a cow, once we reached the main road they used a motorcycle with a cart to reach the hospital. The accident happened around midday, we arrived the hospital at midnight, 12 hours later and somewhere along the way I lost consciousness.

It took six weeks to recover from my injuries physically, and after that I was able to return home. Doctors took some skin from my leg to cover the place where my foot had been. It was very hard learning how to walk again, at first, I used a stick but now I am able to move without one. I got lucky that I still had my heel. It is still quite painful when I walk, and I need to put on bandages to protect the end because I used to get infections and it became even more painful. I have a prosthetic foot but it’s too painful to use so I prefer to walk barefoot. 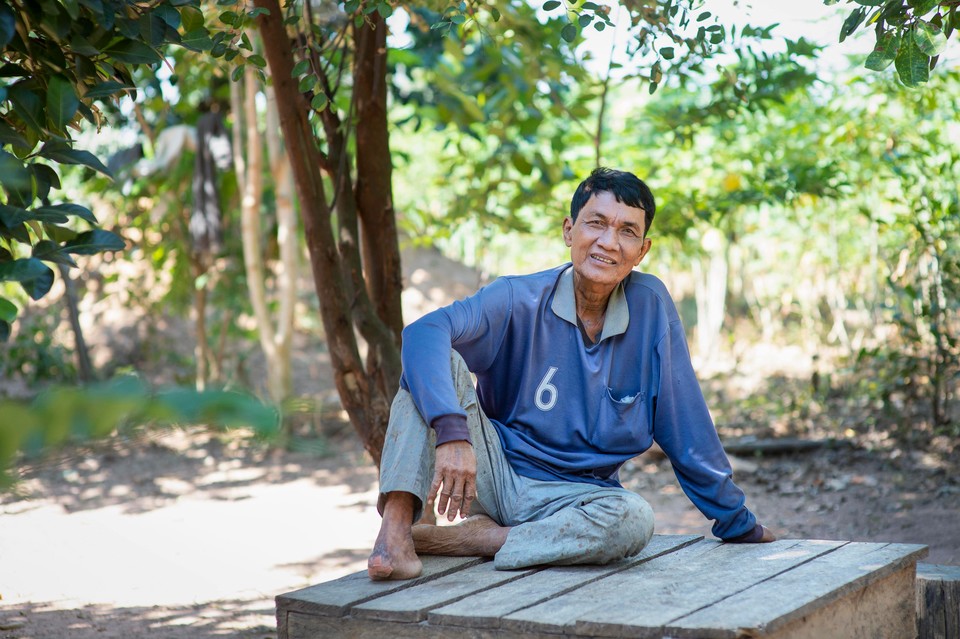 The commune helped me and my family for a year giving us some money and rice, but now we are on our own.

What happened to me is not unique or rare, I know other people that lost their limbs or even died because of landmines. Most of them got injured on their way to their fields. Even for the lucky ones like me who survived the explosion life is very difficult after, aside from the pain we cannot look after our families, and we become a burden to them. Now I mainly take care of the house and the animals, Since I can’t walk or drive a motorbike I only go to town once a year.

I really trust in the work that APOPO and CMAC are doing. I am grateful that they have removed all the landmines and we are safe again. We are now free to move, to walk, play and work our land. This is the most incredible feeling!  I am so glad that rats can detect landmines, the helped clear the land around our village very quickly. I now see them differently; they are very clever animals! I would like to thank APOPO and all the people who are helping and supporting their work, it changes everything to us, and it makes a huge impact on our lives. I know that there are a lot of landmines in Cambodia, and I hope that with the help of APOPO and the rats Cambodia will soon be landmine-free.”

Min stepped on a landmine as he was walking to his field, it changed his life. “My name is Min and I am 60 years old, I live and farm in Sre Nui commune. I am m

A grandfather-headed family who can now safely work and play on land cleared by APOPO....
Read More

Itai wakes up to plough her field almost every day during the Zimbabwean farming season...
Read More

“My name is Keo Sa Ngem, I am 43 years old and live in Prey Ttoteng village. I am the moth...
Read More
Back to Stories
We use cookies on our website to give you the most relevant experience by remembering your preferences and repeat visits. By clicking “Accept All”, you consent to the use of ALL the cookies. However, you may visit "Cookie Settings" to provide a controlled consent.
Cookie SettingsAccept All
Manage consent